Post any technical issues here. This forum gets priority from our staff.
new reply
11 posts • Page 1 of 1

In another thread, fortunjj mentioned the behavior of the Spitfire after you nose over on the runway that I feel should be addressed with an update. The tipping over animation is seriously bugged, at least for me. It isnÃ¢â‚¬â„¢t endless, but the animation repeats for a very long time. I think fortunjj mentioned he slews out of the stuck animation. I just to wait until it ends, maybe go get a cup of tea in the interum. I tested the P-51 this afternoon and itÃ¢â‚¬â„¢s nose over routine on takeoff (say you jam the brakes in) is over quickly, a few sparks, a couple of hops into the air and then youÃ¢â‚¬â„¢re left with your ruined, smoking heap ready to head to the hanger.

Is there any way, or is anything in the works to fix the Spitfire so it bounces just once or twice before coming to a stop after youÃ¢â‚¬â„¢ve tipped onto the prop?

I'll nose the Spitfire over a bunch of times and see what is going on, and fix any strangeness I find. Thanks for the heads up.

Thank you, Scott. Hopefully you see what IÃ¢â‚¬â„¢m talking about and it isnÃ¢â‚¬â„¢t just something to do with my system or hardware.
Top

Jacques wrote:Thank you, Scott. Hopefully you see what IÃ¢â‚¬â„¢m talking about and it isnÃ¢â‚¬â„¢t just something to do with my system or hardware.

Yes! It would be a huge step forward to have control over the state of the plane when the plane noses over without having to use slew mode.

One other thing to consider with this... it was mentioned that the throttle should be set low when exiting the sim in preparation for the next start so that the plane doesn't nose over in the first place. Well, in my last flight with the Spit, the sim crashed mid-flight (as happens sometimes - who knows what was at fault). Anyway, now things are in a bad way for the next start and there is little I can do about it. I *might* be able to catch the throttle before it noses over or I might not - depending, I guess, on the state of the brakes. Hopefully you can see my point here as I mentioned in my last post... relying on the ending state of the last flight simply doesn't work for a plane that is sensitive to initial conditions. It needs to be set to a stable state when it is spawned in a running state. Of all the A2A planes I own - P51, P40, T6 (just purchased this evening - fantastic plane and I even managed a nice 3 point landing first shot!) and the Spit, the Spitfire is the only one with these initialization problems. The Spitfire is my favorite of the lot and I really would like to fly it more but I just can't be sure of the headache I'm in for on the ground.
Top

OK I managed to find the issue, something changed in P3D and we have to increase the damage speed threshold. I cleaned up and improved these points while in there and tested some belly landings. All fixed... 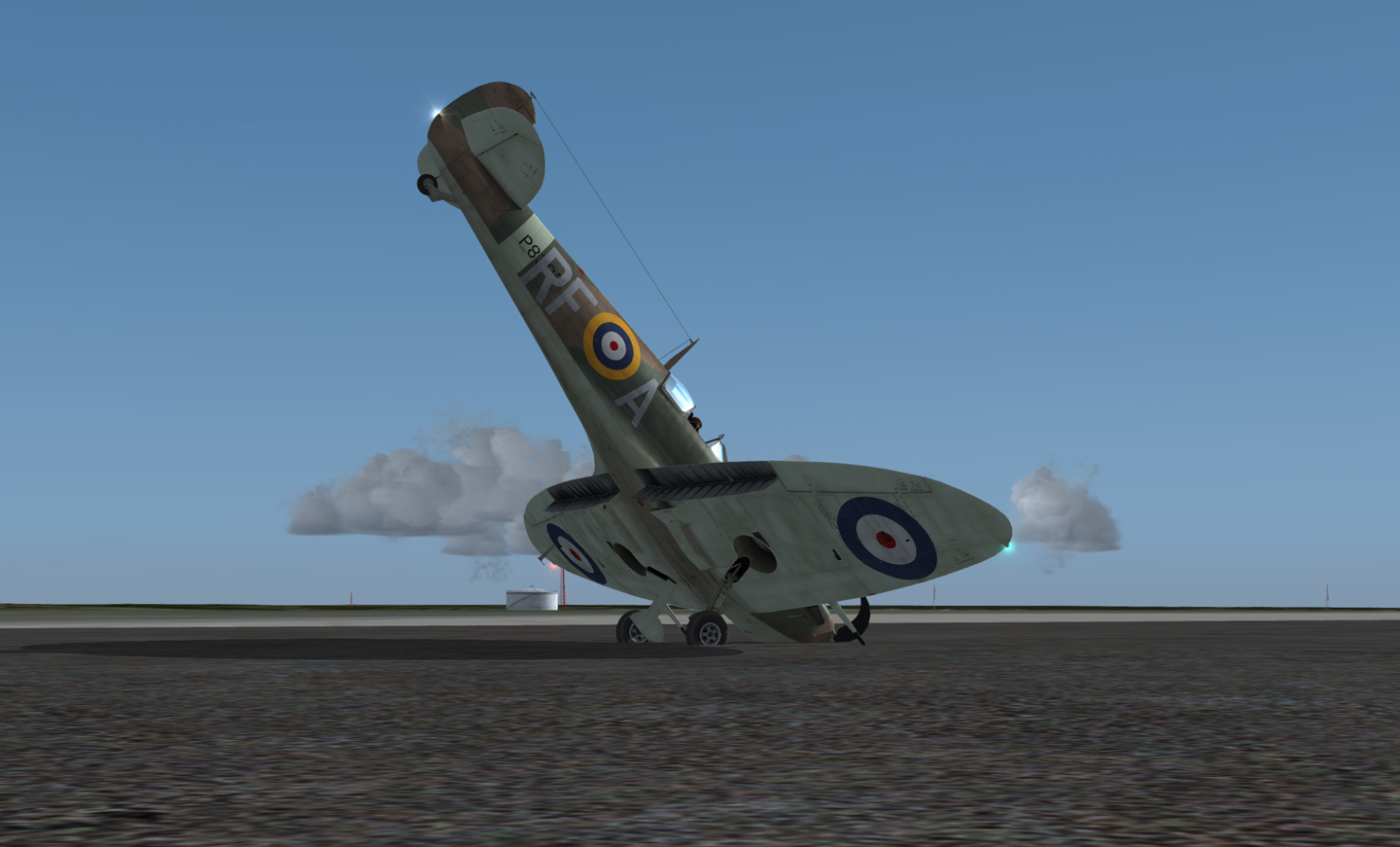 This is precisely why I prefer your products over all others.

Thanks very much, Scott!

Jacques wrote:This is precisely why I prefer your products over all others.

Thanks very much, Scott!


Sent from my iPad using Tapatalk

Yes, he is called the Ã¢â‚¬Å“Real ScottÃ¢â‚¬Â for a very good reason

Oh wow! The photo above is exactly what I saw most of my fellow MP pilots' Spitfires doing as I taxied up after landing at our final destination! I don't know what caused that, but we were on The Skypark in JoinFS and communicating on A2A MP Channel 1, and my squadron mates looked like a bunch of Staffordshire Bull Terriers digging for gophers. Eventually they all settled down so we could get a nice group shot (see A2A site on Discord).

I understand the increased twitchiness of the Spit on takeoff was due to comments from folks who fly the real thing. I'd love to be able to see their stick, rudder, and throttle inputs during a typical scramble takeoff! Maybe a YouTube video? Possibly a split screen; one side showing out the windscreen, and the other side showing control inputs via GoPro. Kind of like what you did with the T-6. Hey, I don't want much...

Thanks for such great, fun-to-fly airplanes.

I find it helps if you start with the stick full aft and full right and then as you open the throttle bring your right rudder in and let the ailerons AND elevators go to neutral at about
the same rate as you open the throttle. It is a little hard to explain but if you try it, you should see what I mean. and also, see here.. https://youtu.be/0bMrhLG3tM4?t=183
<Sent from my 1988 Sony Walkman with Dolby Noise Reduction and 24" earphone cord extension>

Very nice! Thank you for that video. I will keep practicing!

â€œ...sheâ€™s old enough to smoke..so..â€ iâ€™ve been watching that alot lately, also trying to get my takeoffs to be more decent than deplorable. More than a few hours later Iâ€™m fairly happywith the results. But, it isnâ€™t muscle memory yet so if I lay off too long on another A2A aircraft, its back to the pattern for a few.
Top
new reply
11 posts • Page 1 of 1