Where are you taking your Cub

Where are you taking your Cub

So... I'm not normally one for whimsical threads such as this, but too bad... I have three insta-buys on the horizon. Naturally, the Cub is one of them. I'm going to fly one of the other Pipers to Bradford Regional (KBFD), which I'm guessing is the closest airport to the Piper factory at the time. I'm going to pick up the J-3 and fly it to Plum Island (2B2). I think it's fitting that I fly the new rendition of what was my first payware plane to what was my first payware airport. Then I'm going to fly it to Walter Sutton's, near Lake Merwin, WA. It's gunna be a looong trip with no AP, no nav aids, little operating ceiling to play with... And I'm going to enjoy every second of it...

I have none... I WOULD fly it in VR from Vienna through the alps and then up to Norway... if I had it back... Maybe one day.
Cheers
Marc

I just downloaded and installed all the free ORBX water runways in British Columbia. I'll visit all of 'em when the Cub is released.

I'll be continuing my cross-country adventures across the continental US. I've stopped since FSX stopped working for me, and the Stearman just didn't have the same feel as the J-3. But once the A2A J-3 is released, I'll be flying it again!
https://mutleyshangar.com/forum/index.p ... /#comments
Top

CV60 wrote: ↑
08 Dec 2019, 12:55
I'll be continuing my cross-country adventures across the continental US. I've stopped since FSX stopped working for me, and the Stearman just didn't have the same feel as the J-3. But once the A2A J-3 is released, I'll be flying it again!
https://mutleyshangar.com/forum/index.p ... /#comments

I've always wanted to recreate the epic trip the Buck-brothers took back in the days in their Piper Cub. Low and slow, nordo, paper charts only. If the new A2A Cub-release is a proper upgrade (with the correct propeller physics they have in their newer planes) I might do it. If not, I'm not very inclined to spend that much time in the aircraft, but then again the Cub is lovely... So I might do it anyway...

Look at the US cross country route of the Buck-brothers here:
http://1.bp.blogspot.com/-HYtyWCboTek/U ... 2%2529.jpg
Erik Haugan Aasland,

All the Accusim-planes are in my hangar, but they aren't sitting long enough for their engines to cool much before next flight!
Top

Medtner wrote: ↑
08 Dec 2019, 13:05
I've always wanted to recreate the epic trip the Buck-brothers took back in the days in their Piper Cub.

"Flight of Passage" by Rinker Buck.

That's actually a pretty good flight and a good excuse to spend a few hours in the A2A Cub.

Was snowing when I arrived at Bradford in the Comanche. Didn't bode well. The next morning dawned cold, but otherwise a lovely winters' day. Headed from Bradford to Wilkes-Barre then on to Chester. Used a couple of tanks of gas on the way. Further eastward tomorrow. It's great to have the Cub back.

Well, this a surprise! My cross country trip in a Cub is back on ( https://mutleyshangar.com/forum/index.p ... piper-cub/ ), after a Fam flight or two
Top

I bought the Cub an hour or two after learning it was available.

My first flight was my normal sightseeing run from my home airport in Bonham Tx, west along the river to highway 75, then down the highway to downtown Dallas. Around the downtown area, fly through the "keyhole" in that one building there, then back up 75 to highway 121 back to Bonham. This my my default test flight.

I thought about recreating Flight of Passage again but didn't want to read the book yet again. So I decided to make the return flight from California back to New Jersey using my own flight plan. Highway 8, 10, 20, 30, 40, 81, 78 and I'm already at Kingsport on highway 81 after 33 hours of flying. I even got in a bit of night flying under a full moon including my first night flight over downtown Dallas.

I forgot how much fun it was to fly the Cub. Even after 12,000 hours in the sim I'm still learning something new every time I fly, and the Cub is teaching me even more then usual.

When I flew over Knoxville I noticed the SunSphere, which was a prominent location in a book I recently read, and I didn't remember what city it was in or that I might be flying over it. Prepar3D is So Cool!

Not sure where I'll go next after New Jersey.

Ok folks, lets ramp it up a bit and lets see your screenies from adventures so far

Heading west, I've only made it as far as Allentown, PA so far. Heidi is happy with the wheels landings. I've given up on three point with her on board. Hopefully I'll at least get to the mountains this weekend. I've decided to plot a more southerly route to mitigate the winter weather through the mid-west. I lost one day due to weather.
Cub, Cherokee, Comanche, Civvie 'stang, P-40, B-377 COTS, Spitfire, Connie, T-6, C-172, C-182, D-III, Anson, F4U
Top

Just landed in New Jersey, KLDJ is the assumed airport which isn't specified in Flight of Passage. Right at 40 hours over 6 days. Where to now?

After I parked I got out of the Cub and went to avatar mode and walked around. Dang that thing is small compared to anything I usually fly! Probably bigger than a Pitts though. 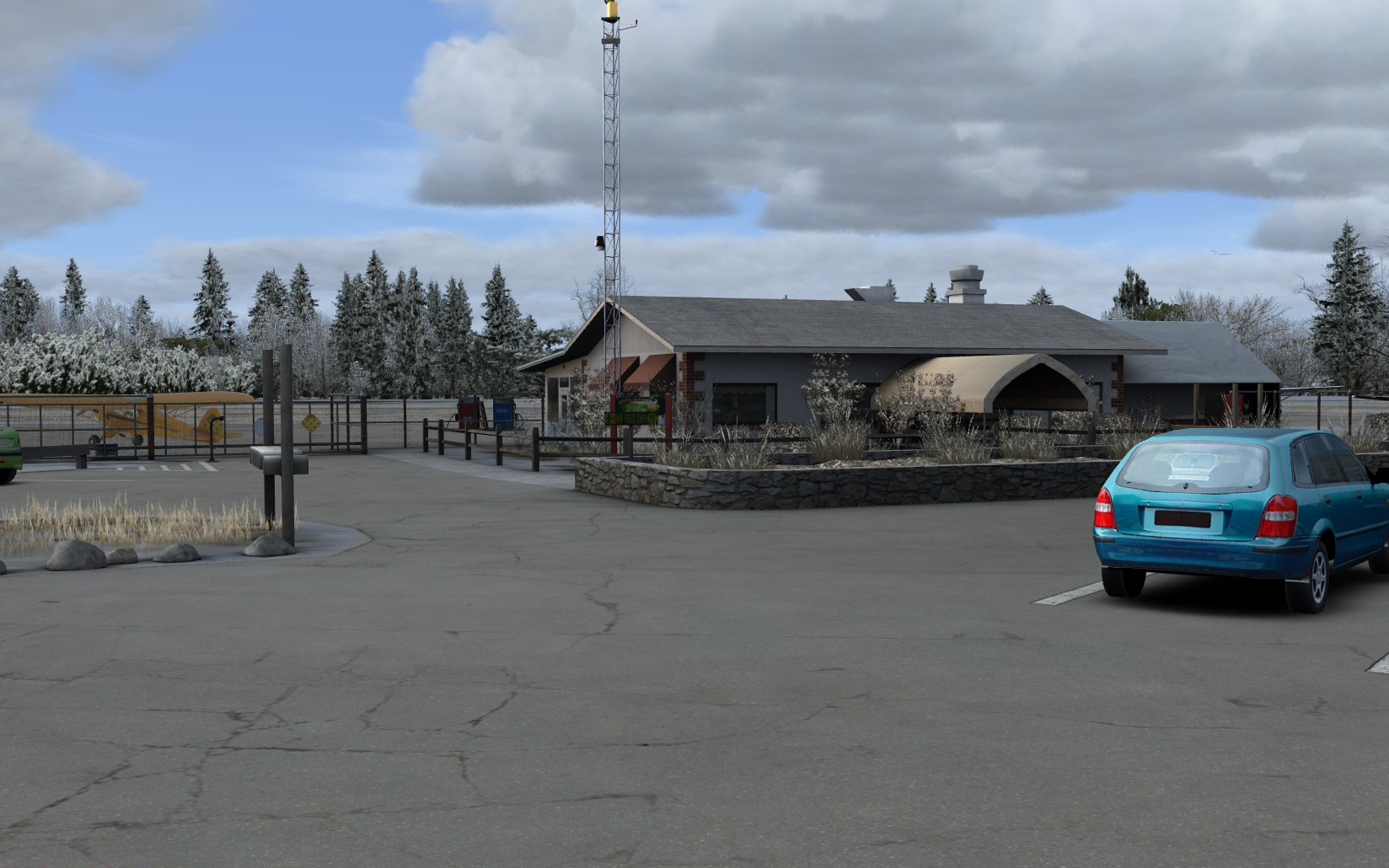 "They've taken all the coal from the ground 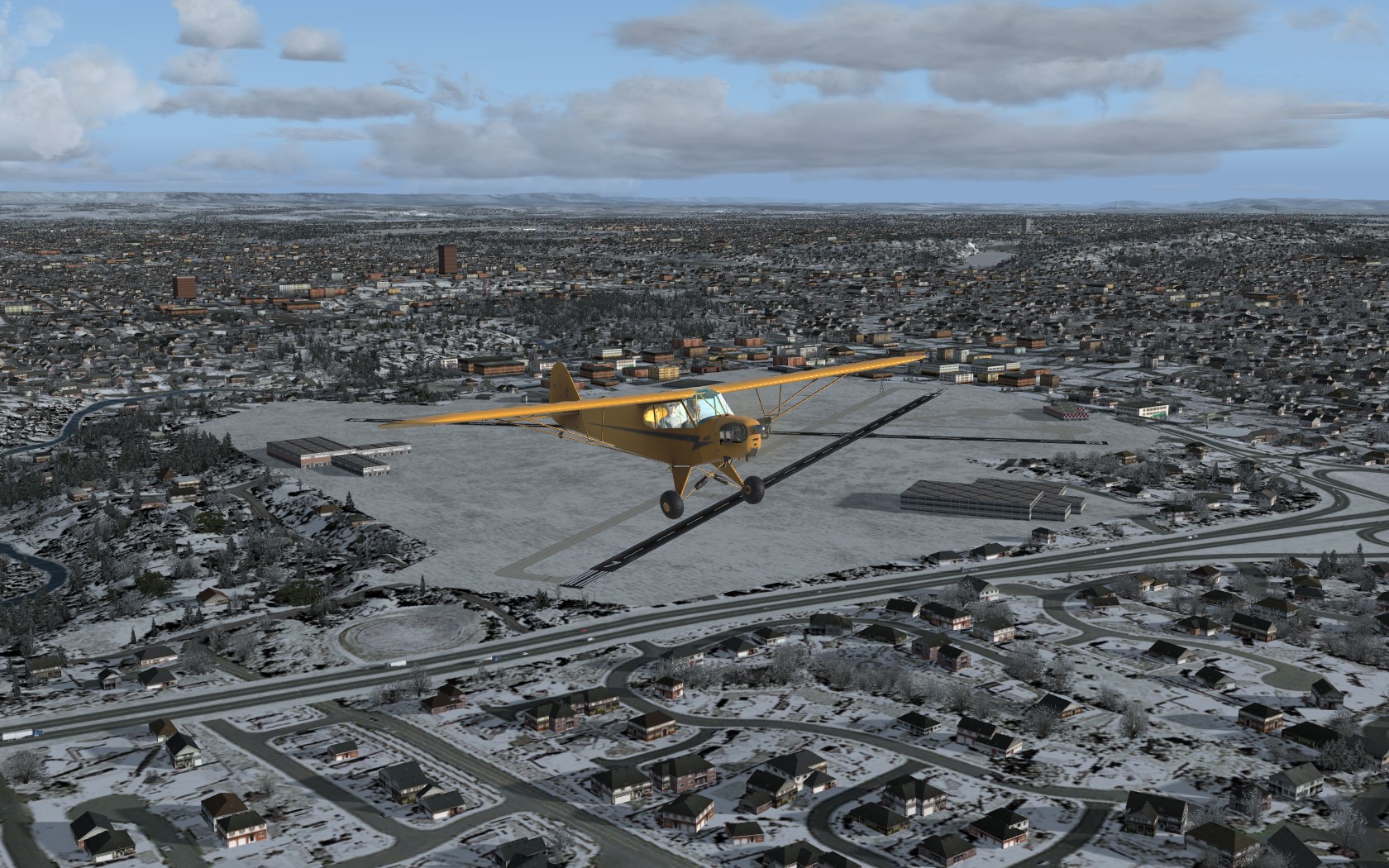 and the union people have run away" 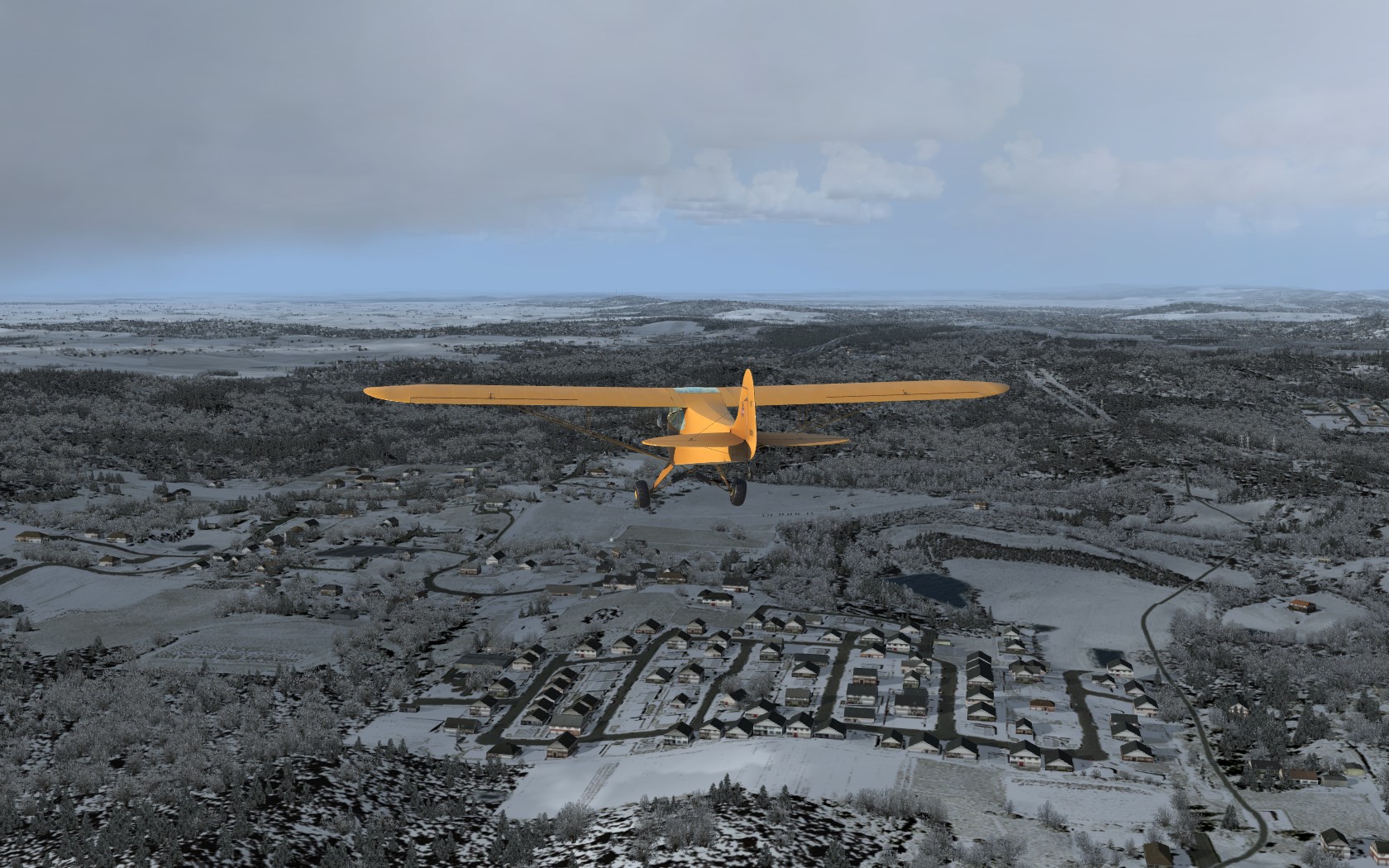 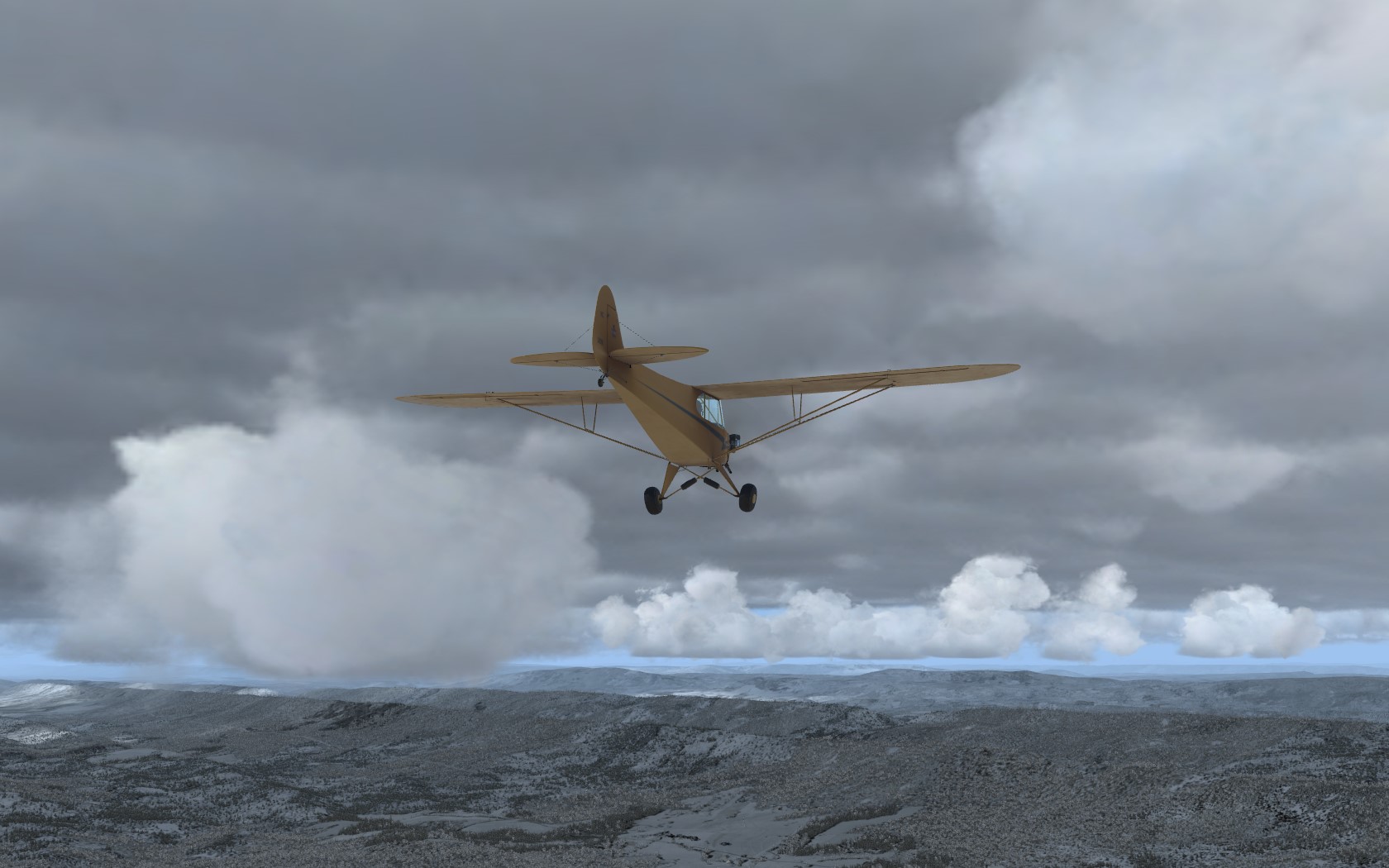 Now in the south western corner of Pennsylvania. Wind was up... progress was slow. Crossing the Appalachians was a bit painful, but we got there. Into West Virginia tomorrow, wind and visibility allowing.
Cub, Cherokee, Comanche, Civvie 'stang, P-40, B-377 COTS, Spitfire, Connie, T-6, C-172, C-182, D-III, Anson, F4U
Top
new reply
119 posts

Users browsing this forum: No registered users and 6 guests