Nice work Bill. Every piece is getting more and more impressive!

Killratio wrote:Nice work Bill. Every piece is getting more and more impressive!

Finished the quilting on the right side wall 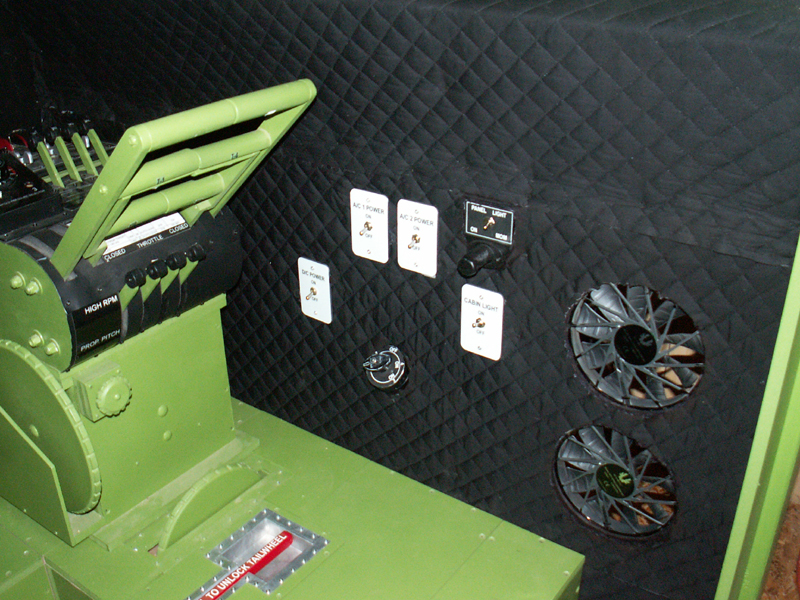 Killratio wrote:It must be time consuming to hand sew all those little squares

Yes, it sure was time consuming! All the old ladies in the quilting bee were pretty proud of me!

Lewis - A2A wrote:Awesome, love the quilted look. So much work, but man it loooks worth it! So much immersion to be had!

It really does add to the immersion!

I finished the metal flashing around the cockpit windows. Here are some pics. 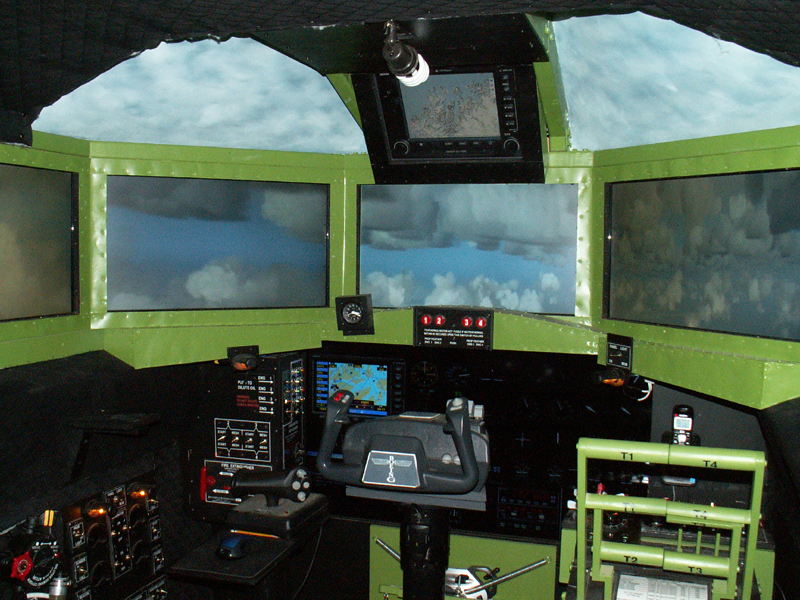 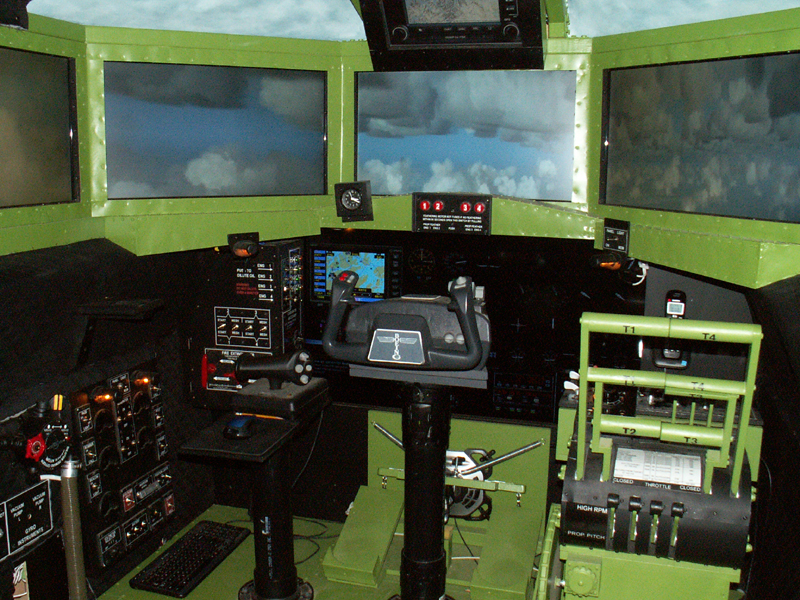 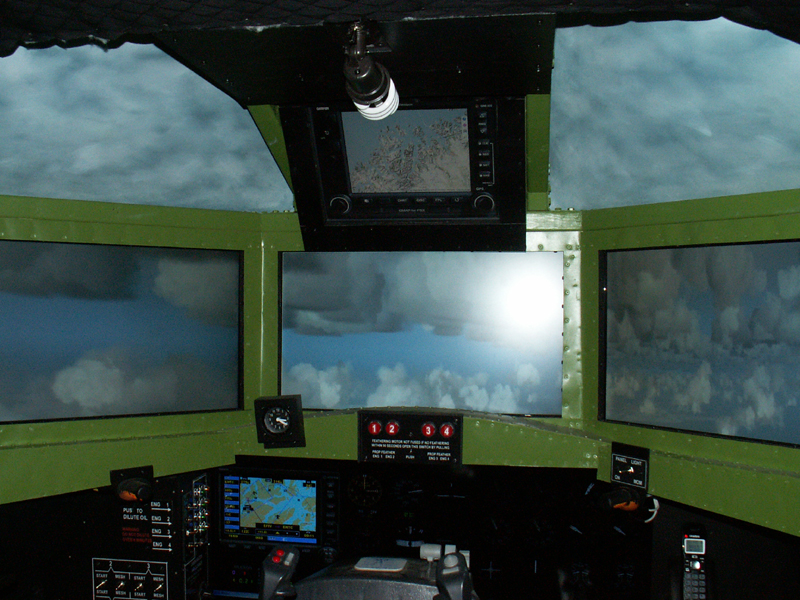 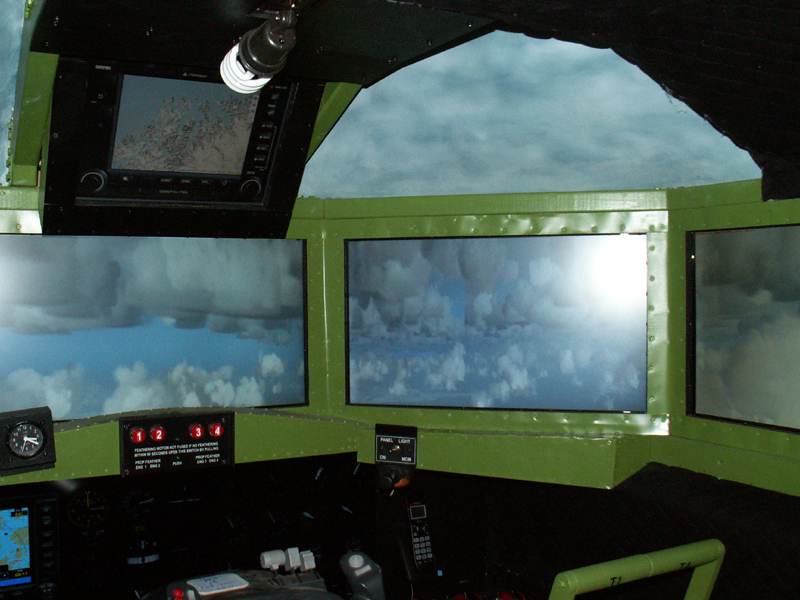 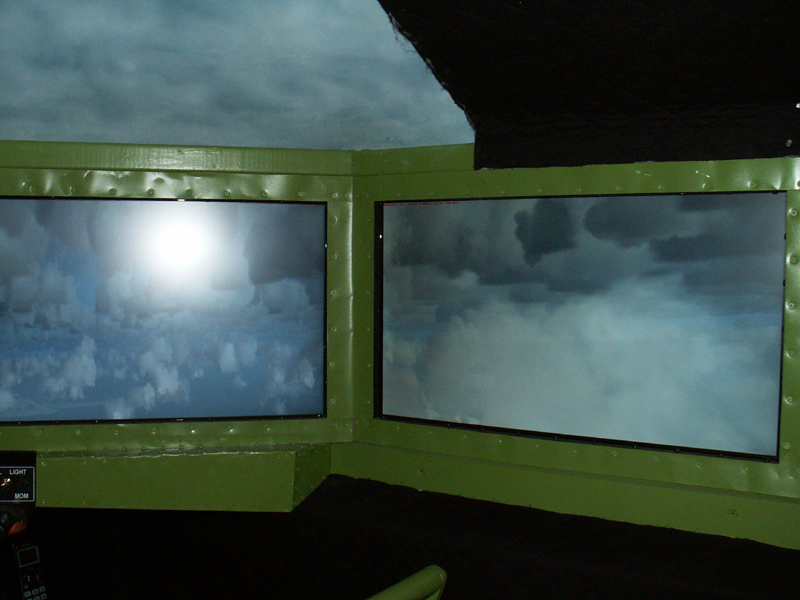 Unfortunately I wasn't able to use the virtual cockpit for the views, and ended up using 2d window views.

The virtual cockpit just doesn't play nice with a multi-monitor, multi-PC system using five separate views. All of the windows don't move in sync, and it was a virtual (pardon the pun!) nightmare to try and set up and align the windows. I had to give up seeing the nose of the aircraft out the front window and the engines in the side windows, but it didn't take long to get used to it.

I used OpusFSX to set up the 2d windows, and was able to get everything synced and running well. The OpusFSX weather is awesome in a multi screen environment. You can see the fronts moving in all the windows.

The light levels are also incredible with multi screens. I was banking at sunset, and as I was coming around, the sun filled my side window, and I instinctively looked for my sunglasses. The same goes when the dark clouds roll in and swallow you up. The whole cockpit goes dark.

I really envy you guys who have a roof to suspend disbelief from!!

Some shots of that sunset would be nice...

I really envy you guys who have a roof to suspend disbelief from!!

Some shots of that sunset would be nice...

Yes, the "experience" really is fantastic! I am constantly amazed at what I see each flight. There is always a WOW moment every time! The roof really helps, along with the doors that I installed last week. I am completely closed in. It really does suspend disbelief!

I will try to remember to get some sunset pictures!

I commenced a flight in clear skies in northern Russia last week, and as the flight progressed I could see a faint dark line of clouds develop on the horizon in front of me. Further on, I had a run away turbo with a frozen waste gate on my no. 1 engine, so I had to shut it down.

The clouds progressively kept getting larger, darker, and thicker as I approached them. All of my windows became "blacked" out with clouds.

I flew into total heavy dark overcast, and then it began to snow. I had zero visibility. I was in the boonies of northern Russia, low on fuel, one engine out, and my destination airport had no ILS capability, so I had to land with visual directions from the controller. Any possible alternate was too far away. I really have to make it a priority to learn how to use NDB/VOR!

I was really flying by the seat of my pants, and totally forgot that I was in my basement in my home. I felt as if I truly was in a B-17 being visually guided down by a controller in Russia in horrible weather. I finally got a glimpse of the runway at 400 ft, and after making a hard over rudder kick to correct my alignment, managed to land safely.

I was totally exhausted after that one! It took me a few minutes after landing to get a grip and realize where I really was!

boris4356 wrote:I have been flying with my B-17 throttle for a few weeks now, and I am happy to report that everything went well hooking it up. I connected all the wires to 2 BU0836X cards, and all the pots worked on the first try. There were no problems at all.

It really is a totally different experience flying with a throttle that controls 4 engines separately. It took a lot of getting used to after all the years of using a CH Pro Throttle on the left side that controlled all engines at once. The first few landings were all overshoots because I instinctively reached over to the left side and tried to slow down using the CH Throttle. I kept it connected to use all of the buttons for other things.

I have found that it takes a lot of co-ordination taxiing using the 4 engine throttle and differential brakes. I have missed a few turns!

It really is a blast flying with this throttle!

Here is a pic of my cockpit with the finished throttle:

If anyone is interested, I can post some pics of the construction phase of my cockpit. It is only 5 feet wide by 5 feet deep, by 5 feet 8 inches high.

It is fairly simple to build, and as you can see, doesn't take up much space. It really enhances the flight sim experience when you are closed in.

Your cockpit looks fantastic....Keep up the good work....

Bill...It would be great if you could post shots of the construction of your cockpit....

Also....I have flown the B-25....and have talked to other pilots extensively about manouvering these big multi engine tail draggers around while on the ground......
I tried this same thing with my cockpits at home and found it works great.....They told me that while manouvering on the ground, they use 2 engines while manouvering on the ground.....For turns they use the oposite engine for the direction and the brake on the wheel they are turning towards.....( Right turn: left engine and right brake.) Outside engines work best for this.
I also have some nice B-17 Cockpit photos i can post if you need.....

Bill[/quote]
Thanks for the info the reason I ask is I am slowly planing a P-47 Cockpit and am looking to some what estimate the cost.[/quote]


The cost of building these depends alot on what you want to accomplish.....Bills system is really nice...And i am sure bill will agree...Alot of time money and creative thinking goes into every part of these cockpits.....
I have a cockpit for just about every aircraft i fly.....switching and setup takes about 45 minutes....
My cockpits are.
F4U.
P-51
P-40
P-47
B-25
B-17
PBY Catalina
G21 Goose
Bell222 and bell UH-1
and one make shift 206 style....
All were made from PVC pipe for the framework....
Bill i used something a little differant then you for the labels.....
I use a very thin sheet of clear plactic to create the labels with and place colored paper behind it to cover the clear areas of the lettering, thus allowing me to add lights behind them. To light them up....
Check your local R/C Hobby shop for these....They work great and add that little extra touch....
The lights used on these are the same found at auto part stores for ombience lighting in your car....
For the momiters i use old Sears projection units from their old projection tvs

Snuffy wrote:Not realistic but suppose you lay the panel back at an angle away from you, that way you'll at least get a possible glimps of the gauges.

Good idea Snuffy! I had to do that with my lower monitors in my current cockpit, and will have to do it as well with my 42" that I am going to use as the Main Instrument Panel in my next cockpit. There are just some compromises you have to make in cockpit building, while still trying to achieve realism.

I put the panel in roughly the same position as it will be in the next cockpit, and tilted the panel 5 degrees, and I can actually see the gauges quite well. I have to lean over slightly and bend forward slightly, as I imagine the pilot in the real B-17 had to do as well judging by the panel's placement in the actual aircraft.

I stuck the camera down roughly in the position my view angle would be to give an idea of the perspective. I actually see it better than what the camera captured, so it is a workable solution. A 5 degree tilt is hardly noticable, and it is only me that will see it anyway. I have to align the gauges better, and either make the gauge bezel extend right down to the screen, or just make complete circle bezels without the half moon, and let the gauge display completely.

*I went back and looked closely at B-17 cockpit photos on aircraft.net, and because the pilot's panel follows the contour of the hull, it actually looks like the panel is tilted, so this solution may not be that far off from reality.

Bill....Idea for this panel.....Since you use a moniter for the gauges....Can you make the rest of the moniter white, so it could light up the lettering in the labels, where you would need.....Might help add to visulation for night flights....

Return to “B-17 Flying Fortress”