This is the place where we can all meet and speak about whatever is on the mind.
new reply
135 posts

A2A Simulations was built on the passion and dream of flying all kinds of airplanes. Just name it, and we want to fly it and make it.

Many years ago we began by simulating WWII era aircraft, incuding such rarities as the German Focke Wulf Ta-152, the French Dewoitine D520 and an Arado 234 twin engine Blitz bomber. Our first product, FirePOWER, is still alive fifteen years after being released: www.a2asimulations.com/firepower. After bringing our love of Warbirds to Microsoft civilian simulators we created classic airliners and general aviation aircraft. There are distinct phases we go through when developing an aircraft, starting with research, flight testing, building, quality control and releasing. The flight sim community had gotten to know how we work through the following phases:

1. Creation: Many on the team go deep into a quiet creative process
2. Release: We release our â€œnew babyâ€ to the public, usually with never seen before features
3. Share the finished product: We all experience this excitement together
Repeat the above

What we have not been at liberty to say, until now, is that one of our recently created aircraft is a T-6A Texan II turboprop trainer, officially being used by the US military. Starting in early 2018, the USAF launched Pilot Training Next which is now a very successful and ground breaking new flight training program that has been built around our new Accu-Sim aircraft. 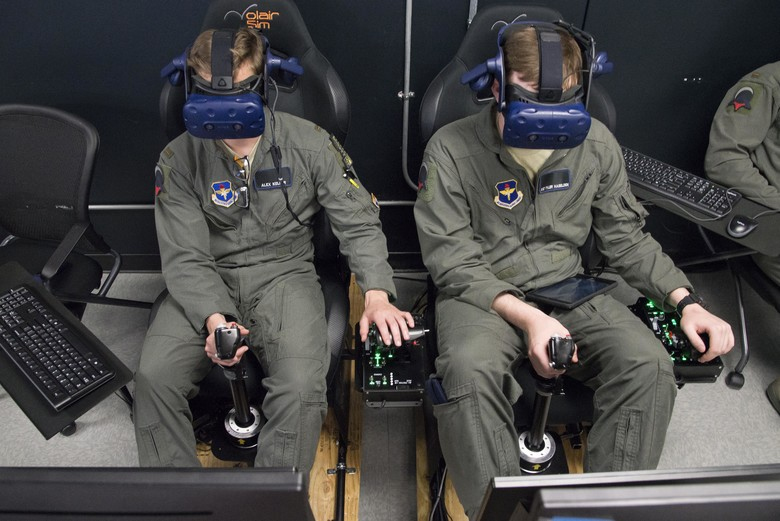 Not being able to share our most recent release means we skipped the most important step 3 and just turned back to our development underworld to develop another aircraft. When we began development of the T-6a we planned for its release to the public around the same time. However when venturing into uncharted territory there are always unexpected events and we had to shift directly from one project to the next.

If you are reading this, then you are part of our A2A aviation and flight simulation family. There are many "groups" in this world and our community is comprised of a special cut of society. Smart, creative, rugged, independent, open minded people living for a dream. Many of us dreamed of flying long before we can remember. While A2A is a company within this community, we are made up of real people with families, friends, and are always putting forth our best efforts to insure we can keep doing what we love... making flight simulations.

Our team doesn't only live for making airplanes for ourselves but we eagerly wait for that moment when we share our work of passion for you. In many ways the last 18 months felt like us being a musical group that made a new album and was unable to release it to the public.

I'm going share what I can regarding other projects in the works, but please accept that anything in development that we intend on releasing, does not mean it will get released. The landscape changes too fast to know anything for certain beyond just a few months. A2A's ability to remain flexible and adaptable has always been one of our strengths and committing to anything long term goes completely against that flexibility.

So here is a breakdown of what we can share that is on our plate:

T-6A Texan II
The Accu-Sim T-6A Texan II is the most advanced turboprop engine simulation available anywhere (yes, including the most expensive multi million dollar simulators). The technology that has gone into it has made an entire new class of Accu-Sim aircraft available to the public. 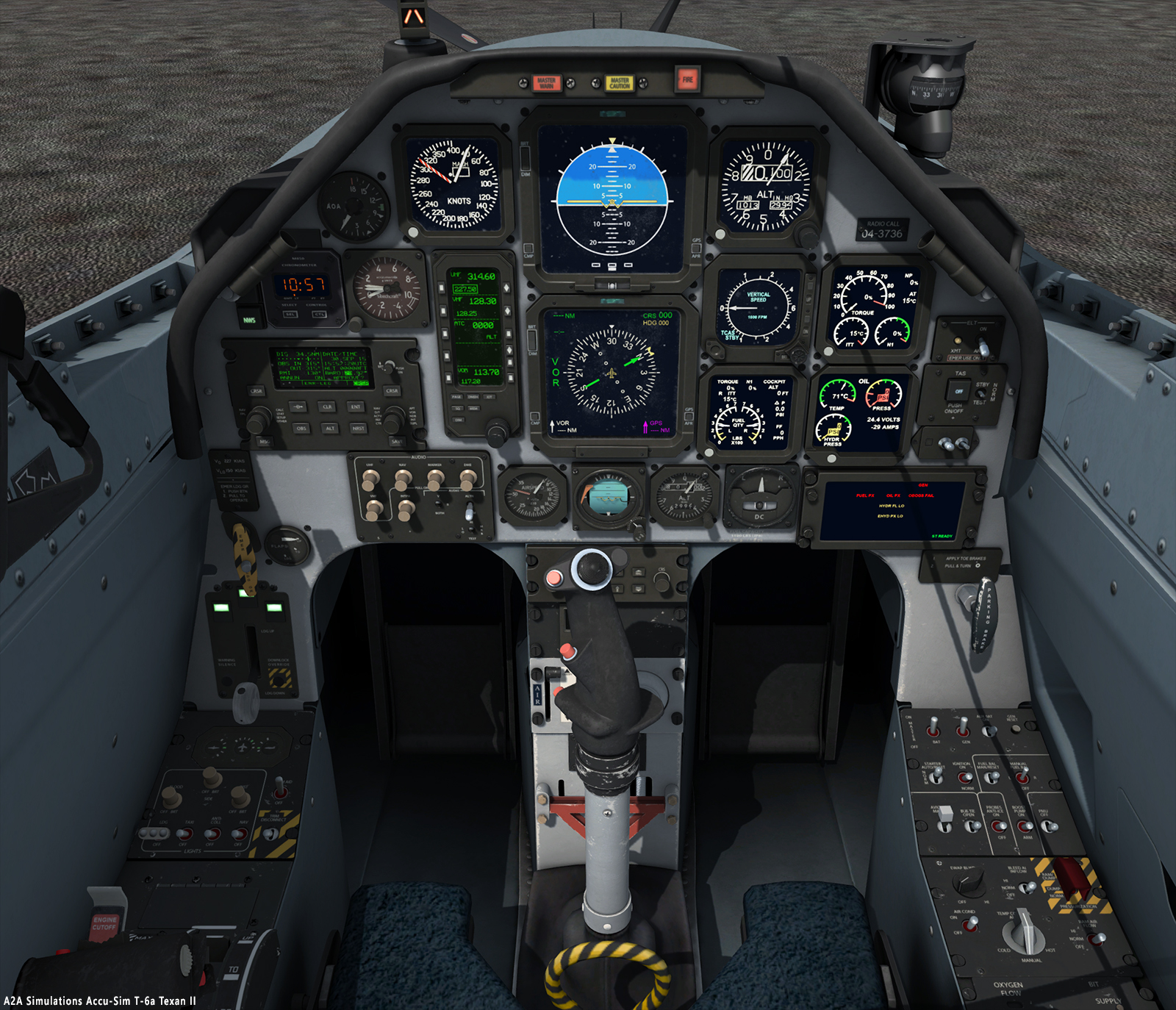 New Spitfires
Guru Richard Banks of Air Tech Simulations reached out to us two years ago to embark on an ambitious new Spitfire simulator in cooperation with the Boultbee Flight Academy. I am grateful to have officially logged Spitfire time and our Accu-Sim Spitfire has been assessed by the Chief Spitfire Pilot as 95% and will be used for training, while some very high profile Spitfire projects with major aerospace institutions are in the planning and spec out stages. Having full access to the aircraft and test pilots mean we can push our Accu-Sim physics technology even further.

BTW the external scenery is blurry only because of the camera is focused on the interior. This is a dome wrap around projection and very clear when experienced in person. 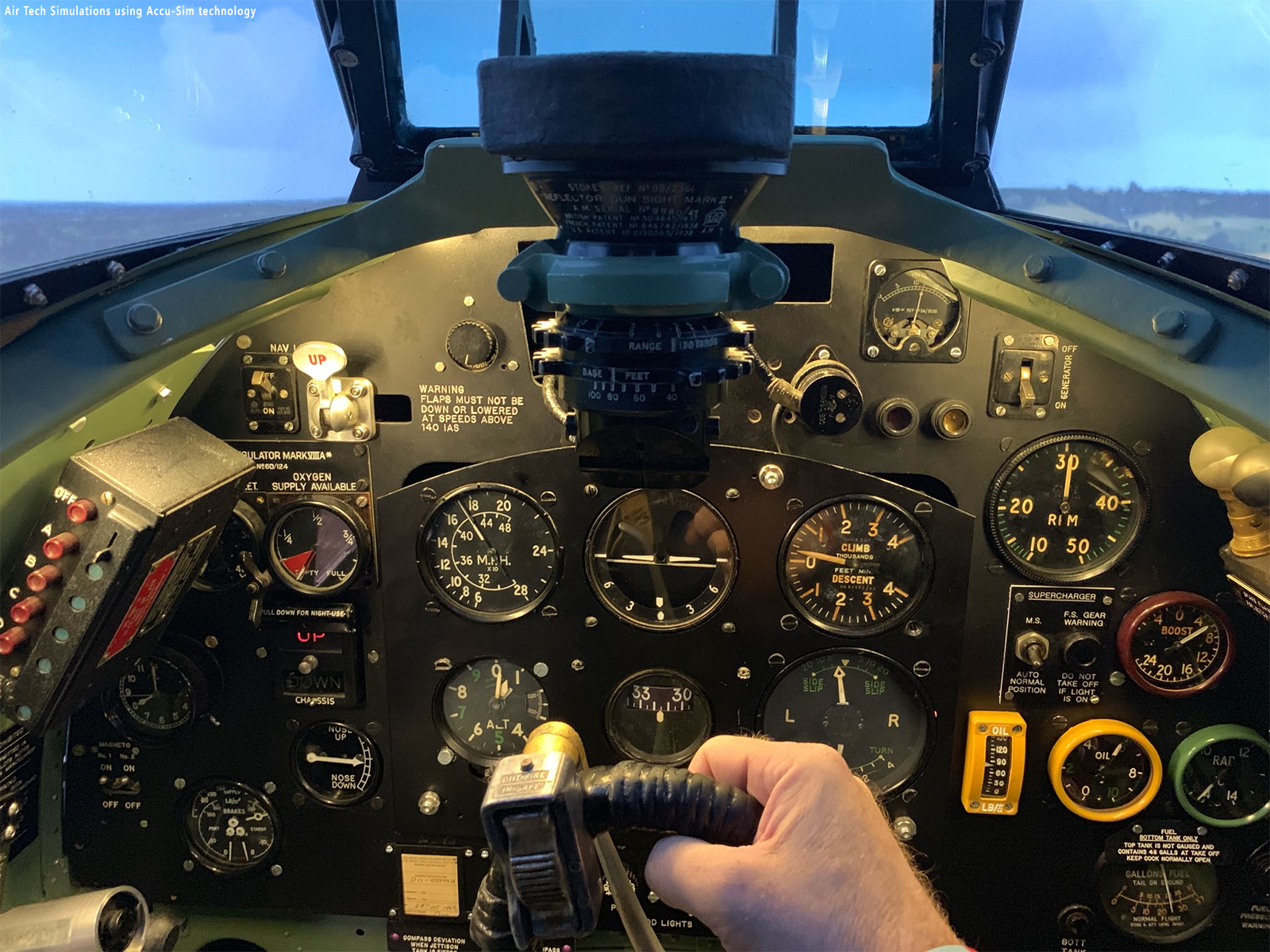 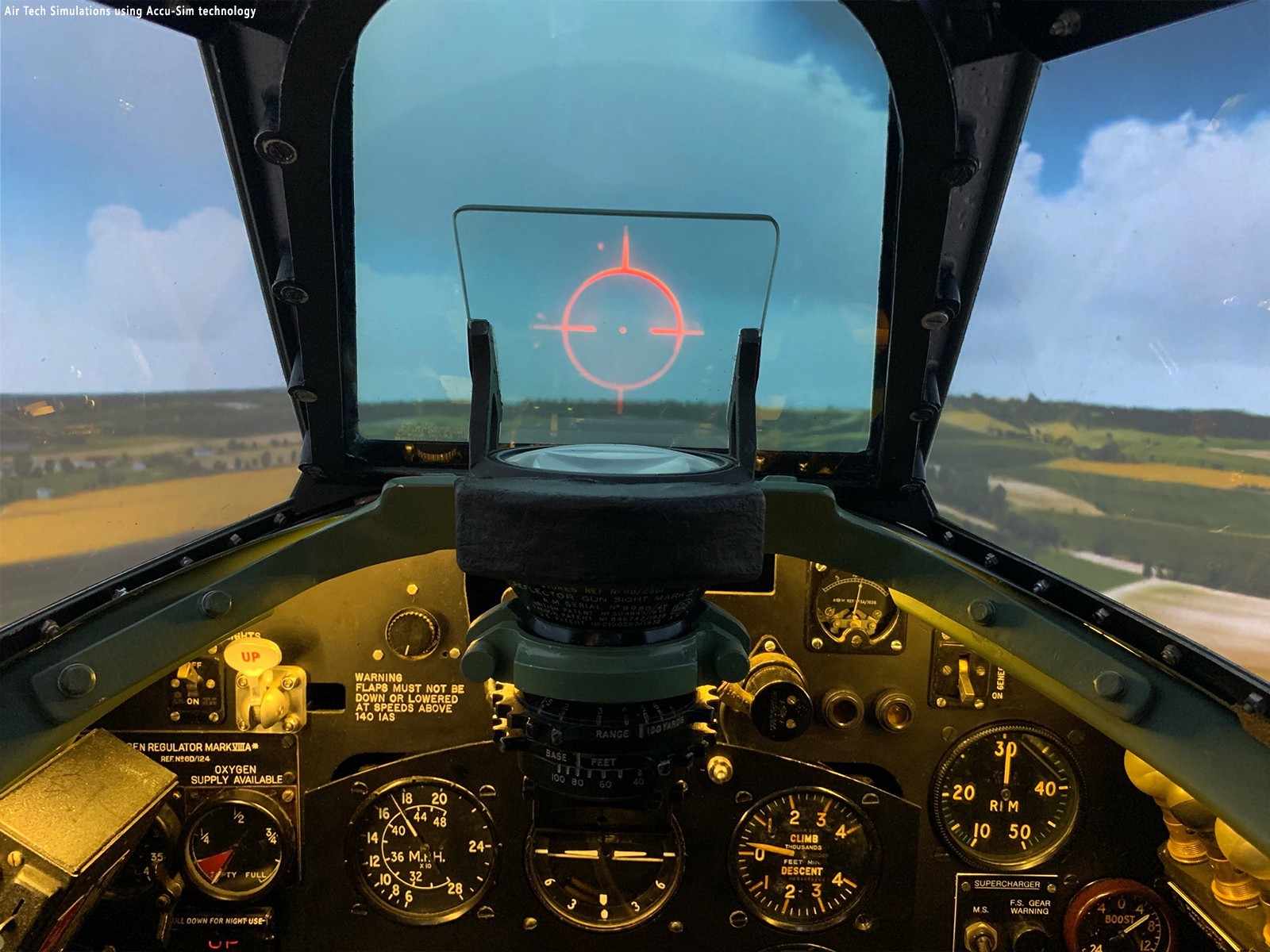 P-51 Mustang
New first hand test flights are planned for the Mustang that will advance our high powered piston fighters to an even higher level of immersion. And we have our good friend and mentor, Dudley Henriques, to keep us on track with all of the fine details of this amazing WWII Fighter.

Aerostar
As the owner of a rare and beautiful Aerostar 600 (almost identical to the one used in the 2017 Tom Cruise movie, American Made), I know this aircraft very well and there isn't an airplane we would rather release more than this Aerostar. The lack of high fidelity twins in the simulation market means an A2A Aerostar would be well received by everyone including instructors, pilots and enthusiasts alike.

Currently the real Aerostar 600 resides in our hangar while the left engine is being rebuilt. Here is a pict of the rebuilt block, new cylinders and new engine parts. 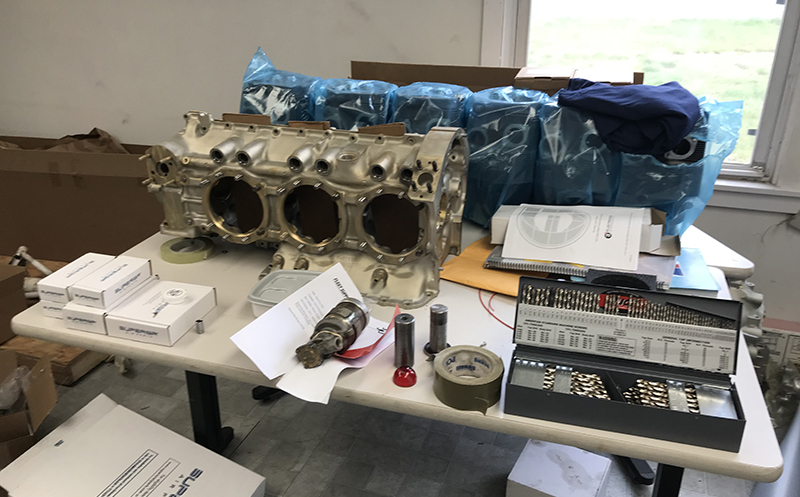 T-38a Talon Trainer
We've just delivered a stunningly realistic T-38a Talon Trainer to the USAF. This is our first Accu-Sim swept wing jet. Our hope and expectation is to bring this jet to our community as soon as we are able. It's a brand new experience and something we know the entire flight simulation community would really enjoy. Michal Puto is the artist behind this aircraft. I had to twist his arm to allow me to post an interior shot of this work in progress: 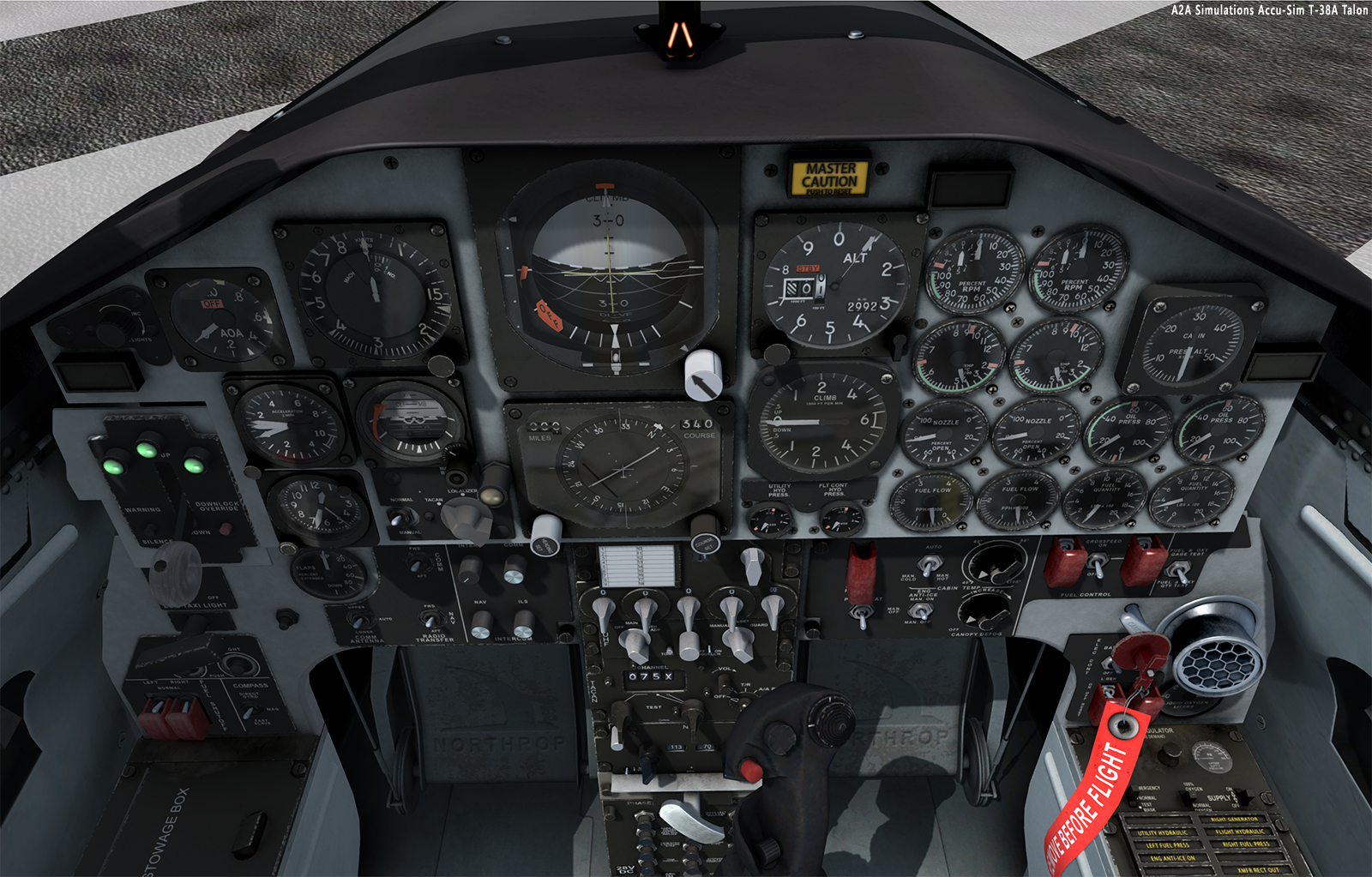 New PBR J-3 Cub and B-17 Flying Fortress
The B-17 Flying Fortress is in early development and we don't have any pictures to show yet but we do have a couple of shots of our new J3 Cub. The J3 is further along than the B-17 and coming along nicely. The cockpit is almost complete and we're now working on a brand new Heidi passenger as well. 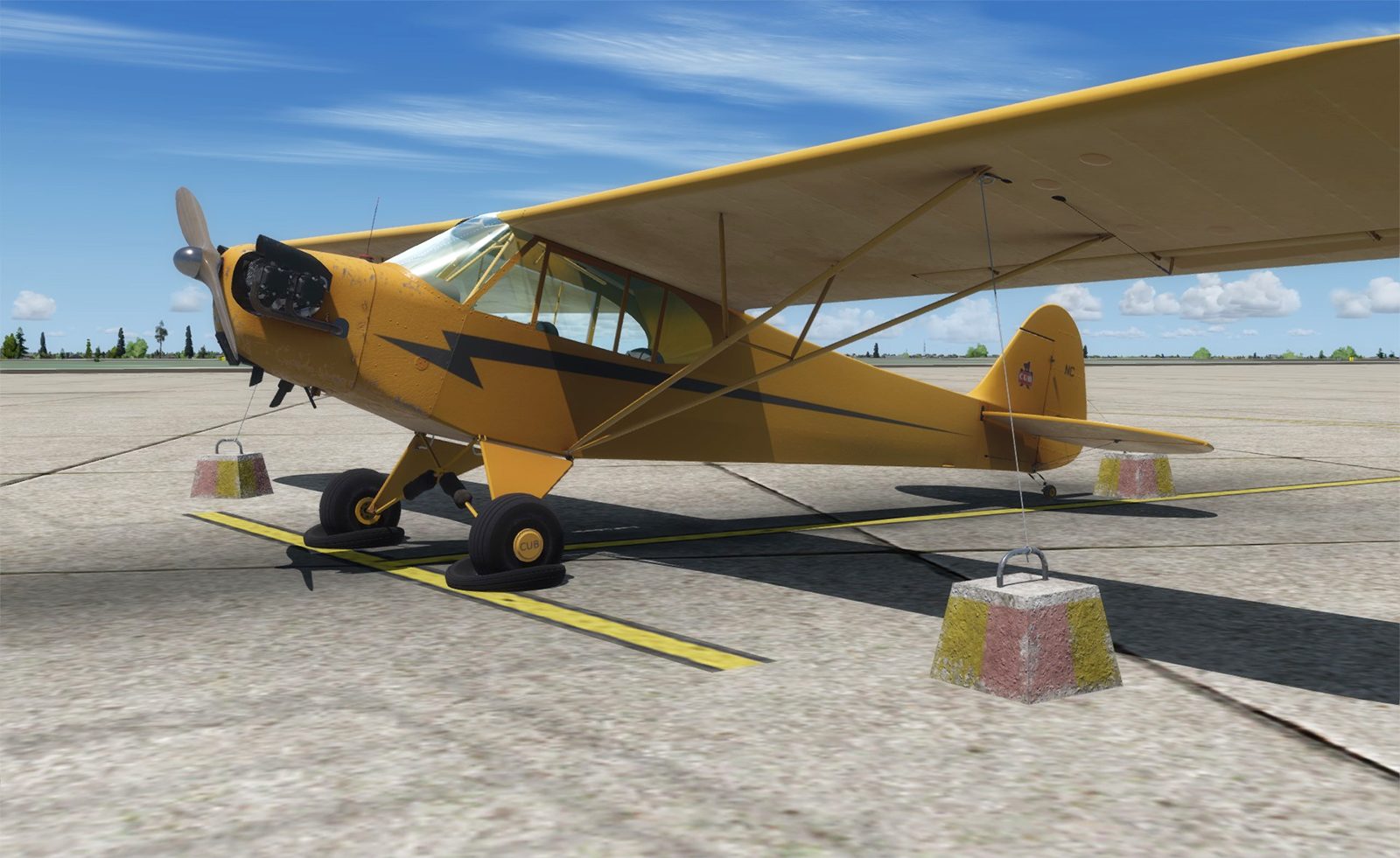 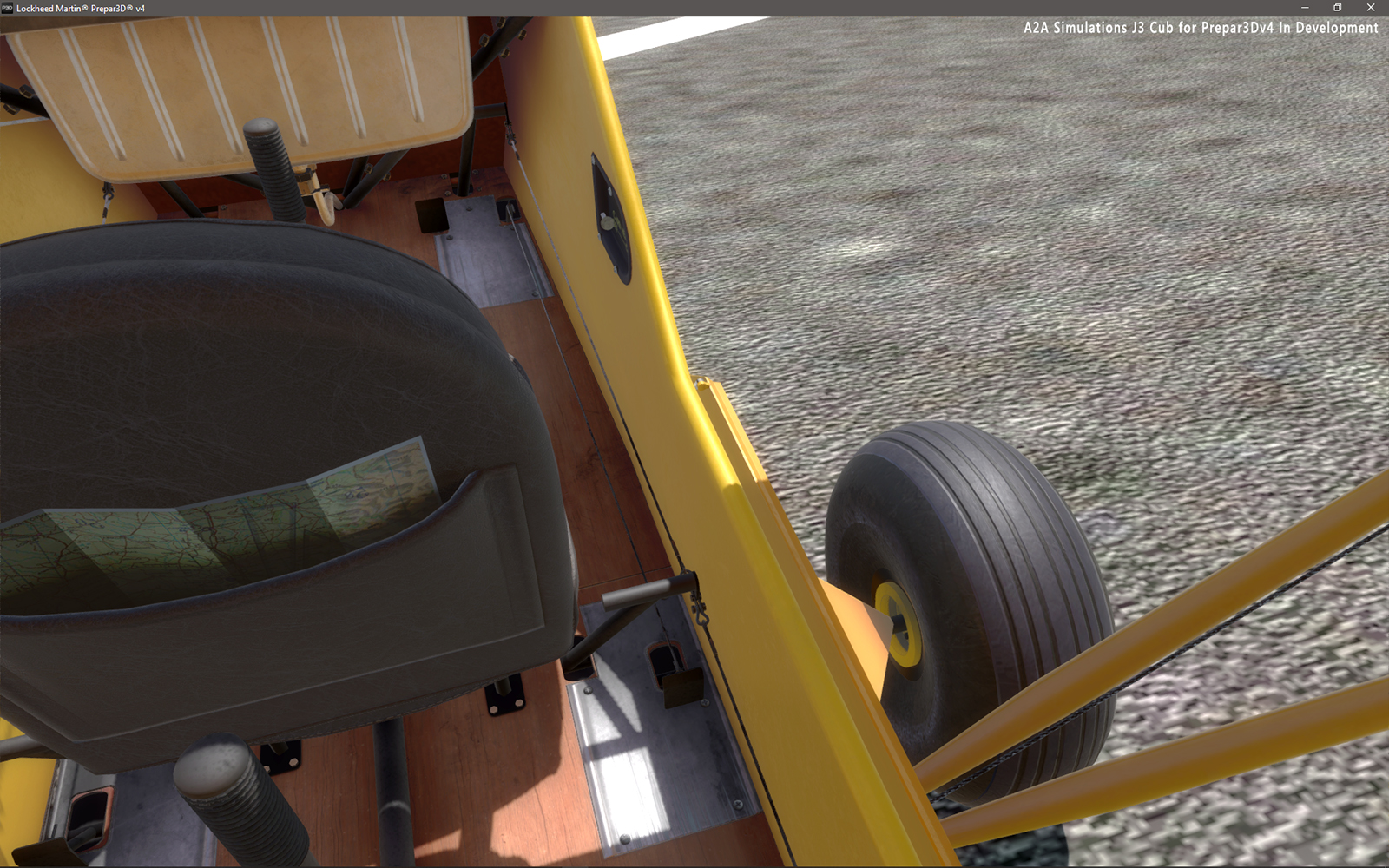 New Strategy Game: "FirePOWER!"
Starting as a child and still today my two favorite types of 'games' are flight simulators and strategy games. I've spent thousands of hours playing both over my lifetime. We have formed a team of five who have been creating a brand new kind of strategy game. Again, we have to be very careful what we show here because we truly want to offer something new and exciting when it's released. This game and technology is also part of a more broad picture which will become clearer to everyone one the game is released.

This name probably brings back memories for some who have been with us for 15+ years, as the air combat add-on "FirePOWER" was our very first (and critically acclaimed) software product. However, we're carrying this name forward to front a brand new technology. The name "FirePOWER" conjures up all kinds of images of battleships, bombers and tanks. We're very excited to be making this game and being platform independent, it will allow A2A to reach more people than ever before. 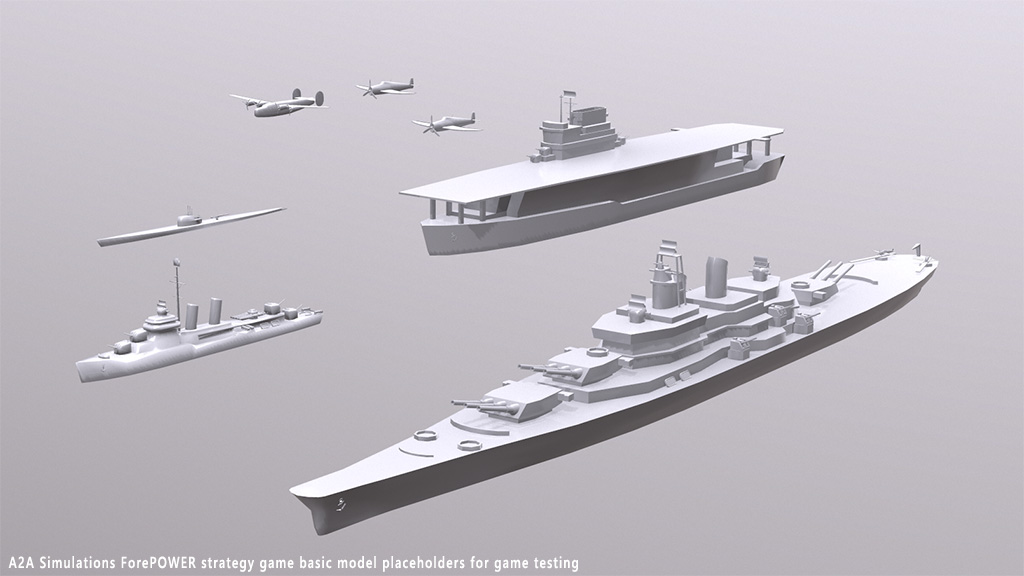 Weekly Multiplayer Flights
The community flights and multiplayer experience has become a now regular weekly event. The Sunday flying adventures using A2A aircraft and the A2A Community Discord server for communications has been growing in popularity with a regular group of simmers flying all over the world, chatting and having fun as they fly. A special thanks to The Sky Lounge community for hosting a great flying server (Skypark) that allows everyone to fly together and Peter over at Join FS for creating the Multiplayer software connecting the platforms so easily.

We encourage anyone with an interest in flying with others to check out the multiplayer area of the A2A forums or A2A Community Discord for details. And if unsure about anything simply ask and post on the forums as we're all happy to help. New Accu-Sim Technology
There is another very exciting technology we've developed and are implementing as we speak, which will take our entire flight simulation tech to an all new level. It will change how we do everything. I can't yet discuss this but it will not be long before I can and it's out in the form of a new product. Keep in mind, research and development is always a risky business. Anyone who owns and operates a company understands that expansion and risk go hand in hand. So far, A2A is still 100% debt free and funding all of these projects ourselves which means we are always "at the controls" which best ensures our success. And we intend on not having a single investor through our entire expansion. Things move slower this way, but truer and with fewer complications. Just the way we like it (need it frankly).

Captain Jake Certified Flight Instructor Weekend Sale
We've reached another big milestone at A2A as our own Captain Jake becomes a certified flight instructor. With his recent instrument and commercial rating, he is now a true professional pilot and open for business. To celebrate this incredible achievement (especially at 18) and to thank our great customers for their patience during the recent website downtime, we are running a weekend long 25% off store wide sale. I better start hitting the books because I now have the toughest instructor in the business.

I hope you have enjoyed this update and peak behind the scenes. Have fun flying in the virtual (and real) skies and see you on the A2A Forums.

Great stuff! I don't know where to begin, so I better stop!

It's obvious that you've been busy, indeed. All kinds of wonderful things happening behind the scenes! The turboprop Texan will be much fun!
Erik Haugan Aasland,

All the Accusim-planes are in my hangar, but they aren't sitting long enough for their engines to cool much before next flight!
Top

Congratulations to your son on his CFI rating. You must be a very proud father!

This is one of those messages rarely seen in our communities... groundbreaking stuff. I am so glad you have now ventured into turboprop and jet territories, the future is bright...

Nice offering a sale to customers in celebration of your son's achievements.

Huge congrats to Captain Jake! He is doing very well!!

Absolutely stoked by this update guys. News of the Texan II and the Spitfire development is music to my ears!.........â€¦.and the Aerostar! What a fantastic update!
Last edited by Dreamsofwings on 10 May 2019, 07:49, edited 1 time in total.

Exciting times ahead for sure. Any idea on when we can expect the release of the first of any of those aircraft?
Top

What? I can't pre-purchase the Cub for P3Dv4?? I already had my credit card out! A sale price would just be a bonus.

and that's without adding Merlins...

I wish you the best for making all of your plans come to fruition. It would make all sorts of sim pilots very happy.

Correct me if I am mistaken, but I do believe A2A never adopted pre-purchase.

Damn, so much to digest of a single post. All the best for the new projects and congrats to Jake.