This is the place where we can all meet and speak about whatever is on the mind.
new reply
46 posts


OVERVIEW
-This installer updates the Accu-Sim Spitfire I/II, P-40 Warhawk, P-51 Mustang Military, P-51 Mustang Civilian, and the C172 Trainer ONLY
-Automatically updates any previous version to the latest v.1.6
-This installer includes and supersedes all prior specific C172 Trainer updates (up to v.1.03).
-The Accu-Sim Piper J-3 Cub, P-47 Razorback, B-17 Flying Fortress, and the Boeing 377 Stratocruiser have their own dedicated update installers found HERE.

3rd Party Paints:
This core update will only overwrite your aircraft.cfg files if you do not have the latest changes (which means once updated, the update can be applied again later without losing 3rd party paints). Your existing aircraft.cfg files will be backed up into your [FSX Install] / A2A folder.

* Special thanks to Erlk0enig for his time and expertise

New Features
- Simulated Elevator Force Slider
During development and through the heavy flight testing of the Cessna 172R, we started to identify differences between the actual yoke movements in the aircraft and how flight simmers interpret their own controller movements. Now with the masses weighing in, we've narrowed this down to two distinctly different camps defined as "Pressure flyers" and "Deflection flyers." Pressure flyers respond to stick spring pressure, while deflection flyers respond to stick deflection and this interpretation happens somewhere between the hand and the brain. My own personal experience on this is, I used to be a pressure flyer, but with the steady activity flying different aircraft types I've slowly become a deflection flyer. However, we've seen even active pilots that fly flight simulation, fall into either of these camps and anywhere in between. Here at A2A, we've always said "we believe in options." We always want the customer to be king in determining what is right for them and this is largely what this update has been about - our responding to customer needs and wishes. We think / hope we created a bridge for both camps and everyone in between, below.

There is a new slider in the lower left corner of the CONTROLS menu (SHIFT-3) called the "Simulated elevator force" slider (will be labelled later) which the user can adjust the elevator sensitivity based on the simulated forces on the yoke. A value of 0 is the current setup for deflection flyers, and pressure flyers can move the scalar up to fit their needs. This would give full elevator authority at slower speeds, yet allow those who find it too sensitive on their controllers to adjust to their personal preferences.


- New Accu-Sim Torque and P-factor Physics
We removed all FSX torque and p-factor and replaced it with new physics in Accu-Sim. This is an all-new system and is still in progress, but so far what we see is a significant improvement over what we've seen in FSX.


- Created elevator ground effect and additional physics
Accu-Sim models the forces of air over the elevator, allowing for fine control during landing flare and soft field operations. Try pulling the elevator back prior to your takeoff run and feel how the nose comes up earlier in your takeoff run.


- Brake axis and taxiing
Some have reported being "stuck" on the ground while taxiing on different surfaces. Our research and testing has determined that there isn't a single source to this, but several. One has been some controllers not fully releasing the brakes. Another is how FSX manages differential braking. We took Cessna 172R "35 Hotel" up twice since in recent days to dig deeper into this area, installing three cameras with one fixed on the rudder pedals. We then adjusted how the controllers interpret FSX and tuned accordingly. 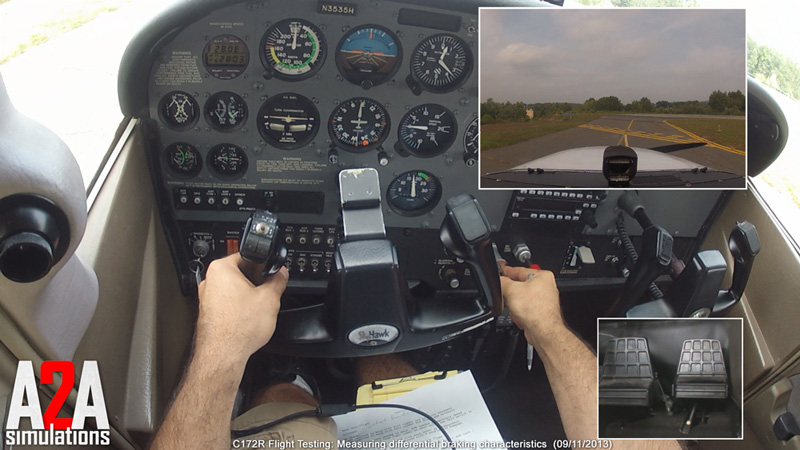 
Misc
- Reduced the lateral weight of the passengers
- Massive plugs a little more resistant to fouling
- Few minor fixes on the textures
- Hypoxia moved 2k feet up (14.5k)
- Damaged vacuum pump now triggers "check engine"
- Slight CoG adjustments and Landing gear strut behavior changes (special thanks to Alex Metzger)
- More cockpit items and configurations saved with aircraft
- Fixed prop hub in VC view
- Reducing MP server flooding
- Fix to right door for SP2 users
- Fixed tooltip of left doors handle
- New landing lights beam logic
- Fixed altimeter pressure scale in hPa
- Faster Accu-Sim to FSX interface
- Maintenance hangar will give more detailed reports if fouled plugs are found
- pFactor and engine torque effect on airframe physics tuned (still in development)
- Smoother drag rumble with flaps (the sound represents a rumble felt in the seat)
- Ground thump volume reduced (taxiing over cracks and seams in the real C172 make very loud, audible thumps due to the main landing gear design. This is maintained and true in the simulator)
- Removed entry in panel.cfg that may have been contributing to missing VC clickspots and some loss of performance on some machines
- Thicker ADF needle
- Fixed text placement on the dash
- New light illumination dll for WinXP users
- Improved autopilot altitude control in low fps situations
- Reduced the number of axis events sent to the simulator
- We hope this fixes the elusive missing vc clickspots some are reporting.
- Increased modeling of pfactor. Should require moderate rudder on roll out, slight taps on takeoff run, slight pressure on a standard climb, increased pressure approaching a stall. Also reverse torque has been simulated. Try flying at a moderate speed, under 80kts ias, and cut the throttle. You should get a very slight roll to the right. The aircraft will always have a slight roll one way based on these power changes (watch how the ball moves). The only time the plane will fly neutral is during cruise operations (when the prop is neither pulling or pushing). The pfactor does pull more than it should while taxiing. This will be remedied in the next update.
- Specific testing and tuning of side forces in preparation for new bank indicator physics currently in development
- Fixed typo on the dash and RPM hour digits lightmap
- Slightly stronger thrust from the stalled prop
- Lowered the speed in which the drag sound from the flaps creeps in to match felt rumble in the C172R
- Fixed a bug that was causing issues from an abnormal AoA value happening when taxiing
- Should fix sticking toe brakes on all systems 100%

Prior Core Updates Included
Below is a changelog of the prior core updates included in this installer:

CHANGES from v.1.5 to v.1.5.1
All Core Aircraft
- New accu-sim dll for improved performance and fixes some crashes reported on a small percentage of systems
- Offset contrail effect further back to avoid being seen in cockpit


Summary of new features in Core Update v.1.5
- Airframe and engine physics tuned to give better feedback about how the engine is running and how the air is passing over the airframe
- New fuel burn coding now monitors more systems and air qualities, making for better simulated fuel consumption
- Various fixes and improvements after listening to our customers in our community (thank you to everyone who takes the time to tell us what you think)
- P-51 Military owners will see, from the cockpit, an improved main canopy frame and a re-designed upper nose area among other fixes and improvements
- P-40 owners get a new tailwheel and better tuned prop and flap drag curves
- Spitfire owners get a slightly more robust engine and those using the fixed pitch prop should see a longer engine life


Changes from v.1.3 to v.1.4
General
- Engine hours and aircraft system states preserved (for those already on core update v.1.3)
- Fixed issue that caused one mag would sometimes not fire correctly
- Some changes to cabin humidity as cabin was fogging up during very humid days and rain

FIXES:
- Sometimes moving to a new airfield from being in the air would result in the gear not being lowered.
- Reduced moisture put into the air by breathing


Changes from v.1.1 to v.1.2
- Re-designed hydraulics
- Reduced the speed of outside canopy fogging up
- Aircraft can be jacked up
- "Check engine" in mechanic's notes will be persistent and not disappear after you have checked the engine
- Updated spitfire configurator so shortcut works
- Re-tuned side forces in flight model
- Added fuel line size differences for each aircraft
- Battery charging is a consumer
- Fixed bug that may have been responsible for unrepariable hydraulic leaks
- Made adjustments to the detonation. It is more sensitive to higher CAT
- Spitfire has mechanical gear locks
- Radiator lever control works and sounds better when mapped to an axis
- Added additional fuel system modeling. Fuel first has to drop from tanks, then the fuel pumps need to pump and pressurize the system
- Gear repairs on ground puts plane on jacks and repairs
- Coolant consumption bug fixed
- Autostart primes fuel
- Engine heat damage after shutdown fixed (this was another bug)
- Humidity goes to 0 when air is freezing
- Battery doesn't drain when switch is off (Spitfire battery is always ON)
- Hydraulic pump failure fixed
- Smoother landing gear animation
- Random prop start position
- Engine wind-down friction tuned (9 sec for merlin to stop after mixture cut)
- Can now start engine on primer alone
- Code supports broken reduction gear (may not implement until P-51)
- Busted crankshaft will seize engine
- Fixed bug when touchdown sounds are heard in air under very high G load
- Fixed the way the engine sucks fuel into cylinders.
- Oil friction tuned
- Detonation system re-calibrated
- High speed shake support added with scalars for each plane
- Fixed engine popping
- Gear physics added. Gear is affected by weight and air forces. Gear locks up and down.
- Hydraulic hand pumps (spitI gear handle is a hyd hand pump) now uses pressure physics
- Improved gear system damage modeling. Gear locks can break and gear can jam
- Improved flaps damage modeling.

Excellent work from all the team at A2A - many thanks guys.

The installer in beta went all the way to v.1.5.9. That number is only for the installer, marking the point at which the aircraft.cfg file was last changed.

Just to mention (as I don't see a direct reference in the note above) the update includes an option to update a P3D V2 installation - thanks for this A2A! This is the only bird I fly in P3D V2 at the moment and works great.

My DME now works! Hopefully it stays this way...

I thought that there was a bug when my airspeed didn't work...then I realized I forgot to take of the pitot cover!!

You can re-run the core update installation to change this. We recommend going with the standard 3d lights as used in our other Accu-sim aircraft as the illuminated lights after careful testing with the great help of the community where the direct cause of the click spot issue.

For some reason on both my FSX and P3D2 systems, the installer does NOT see the P-51 Mil and Civ and says they are not installed. Yet when I start the sim and go into the a/c and shift 7 - the maint hangar opens.

Hmm - must have screwed up somewhere - have the wop_p-51_Manual but not Accusim.
Top

I would install Accu-Sim again just to be sure. Scott.
A2A Simulations Inc.
Top

Rgr - so reinstall Accusim and then the 1.6 or incremental?