For those who may not know the back-story of this paint, member NAA551WB posted in the repaint request thread mentioning that his grandfather flew Navy SNJ's at Pensacola, FL in 1950 and '51, and through his grandfather's logbook, one of these was SNJ-5 BuNo.91066, which just happens to still survive today, stored pending restoration at Tri-State Aviation in Wahpeton, ND. The request was to depict this aircraft in its original markings from 1950/51, and as if it has been restored and flying today.

Utilizing a number of period photos of Pensacola SNJ's from this specific time period, as well as the specifications for markings at that time, I put the scheme together. The only detail not known is what the aircraft's original individual identification number was, as would have been assigned and applied to the aircraft at Pensacola. These numbers were not based on the BuNo's, and thus choosing a number other than one in the BuNo would likely be closer to accurate. Based on the photos I have, there are SNJ's at this time with single and double digit ID numbers from 1 to the 40's. I ended up deciding to choose 28, as I thought it would look nice, I have photos showing exactly what those stencils looked like, I haven't found any photos of that particular example, and it is my current age.

NAA551WB, I know part of the request you had made was to apply the N-number N813WS below the horizontal stabilizers, however I have instead applied the aircraft's real N-number, N8005V. If, however, you still want N813WS on it instead, let me know (I'd also like to know the story behind it).

Expert opinions very much appreciated (requested)! Remember, it is intended to represent the real-world aircraft post-restoration, but with the markings all accurate to original specifications. At this time, I'm still working on the cockpit gauge textures for this one specifically (Navy gauges with Munsell green details on the faces). The aircraft remained a straight SNJ-5, so it never had a tailhook added. 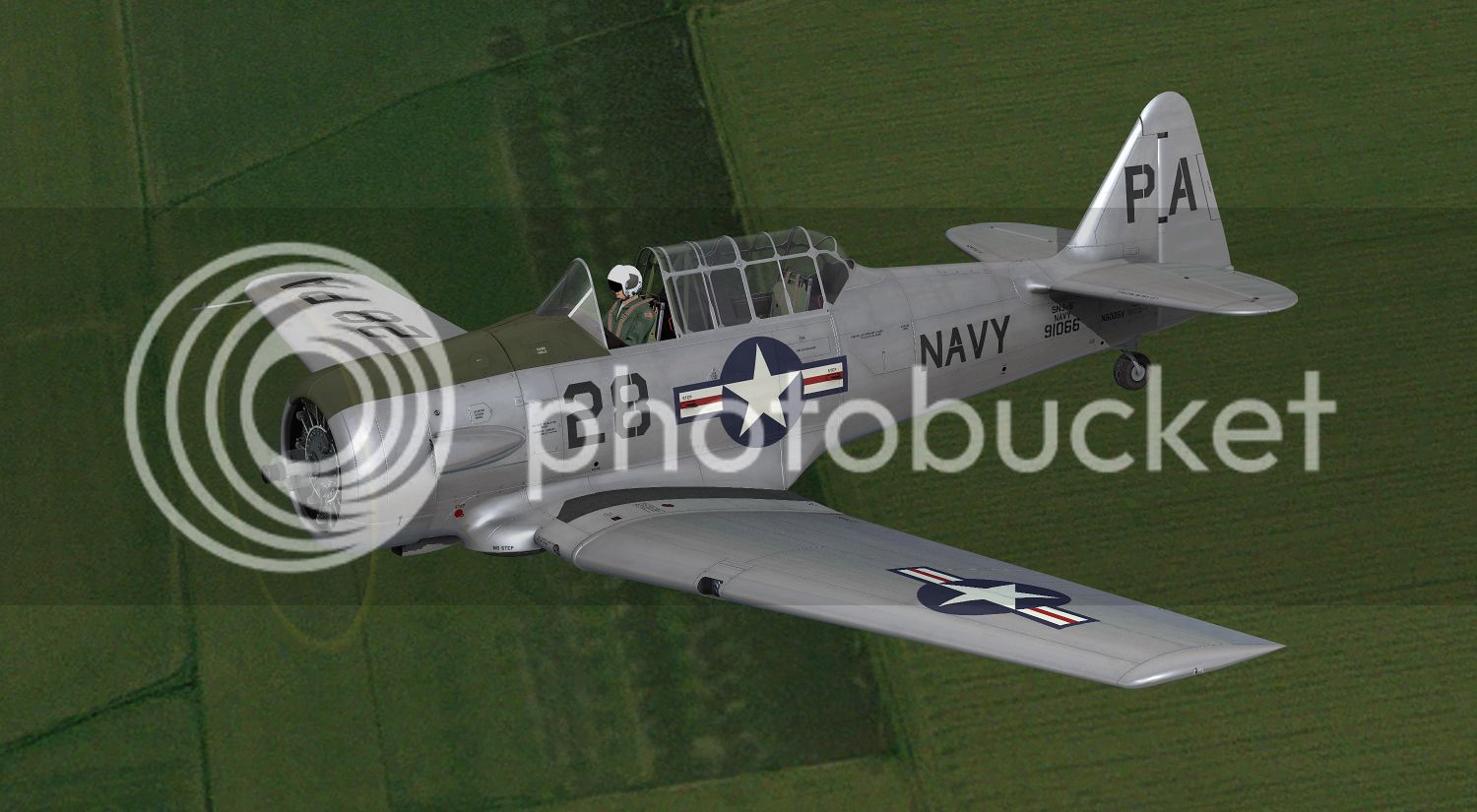 You might check with the Naval Aviation Museum, it's not impossible that they'd have a photo of the aircraft.

I contacted them recently regarding the 7055K repaint and they responded the next business day.

Yea, something about this one I really love.
Top

I agree...That is a Terrific looking SNJ. Love everything about the repaint and the story behind it! Wouldn't it be something if that is the way it would be restored somewhere down the road??
Top

That is a really nice looking bird. Can't wait to add it to my rapidly growing hangar.

Absolutely incredible!! The reason for the N number change is that 813 signifies my wife and I's anniversary of 8-13. Also 8+13 is 21 which is my lucky number. The number 8 also signifies the day of the month our son Freddy was born 6-8-10 and if you multiply the 13 by 2 you get the number 26 which is our second son's Jacks birthday 11-26. The S and the B in N813SB is for my wife and I's name, Summer and Bill. The ID number of 28 also works great since my wife's birthday is on 8-28. If I owned an SNJ this is exactly how I would have it, with the colors my Grandpa flew her in and also my families symbolism on it. I cannot begin to say how thankful I am that Bomber took this on and has exceeded my expectations!

This WIP looks outstanding. Are we getting close to release?

The anticipation is killing me!! I don't want to fly any other skin until this one lol!

Sorry for the wait, guys! Here is the completed repaint:

I have a couple other Pensacola examples with the same layout of markings - another silver one and a yellow one - both being done to original period photos of those specific examples from the early 50's. Those will be uploaded to the library sites when completed.
John Terrell
Top

Yep, what he said ^! Swooping them up know.
Top