We're putting a new update beta into testing today and if all is OK, may put it out here for anyone to try.

Simulated Elevator Force
During development and through the heavy flight testing of the Cessna 172R, we started to identify differences between the actual yoke movements in the aircraft and how flight simmers interpret their own controller movements. Now with the masses weighing in, we've narrowed this down to two distinctly different camps defined as "Pressure flyers" and "Deflection flyers." Pressure flyers respond to stick spring pressure, while deflection flyers respond to stick deflection and this interpretation happens somewhere between the hand and the brain. My own personal experience on this is, I used to be a pressure flyer, but with the steady activity flying different aircraft types I've slowly become a deflection flyer. However, we've seen even active pilots that fly flight simulation, fall into either of these camps and anywhere in between. Here at A2A, we've always said "we believe in options." We always want the customer to be king in determining what is right for them and this is largely what this update has been about - our responding to customer needs and wishes. We think / hope we created a bridge for both camps and everyone in between, below.

There is a new slider in the CONTROLS menu (SHIFT-3) called the "Simulated elevator force" scalar which the user can adjust the elevator sensitivity based on the simulated forces on the yoke. A value of 0 is the current setup for deflection flyers, and pressure flyers can move the scalar up to fit their needs. This would give full elevator authority at slower speeds, yet allow those who find it too sensitive on their controllers to adjust to their personal preferences.

Brake axis and taxiing
Some have reported being "stuck" on the ground while taxiing on different surfaces. Our research and testing has determined that there isn't a single source to this, but several. One has been some controllers not fully releasing the brakes. Another is how FSX manages differential braking. We took Cessna 172R "35 Hotel" up yesterday to dig deeper into this area, installing three cameras with one fixed on the rudder pedals. We then adjusted how the controllers interpret FSX and will be testing this today. 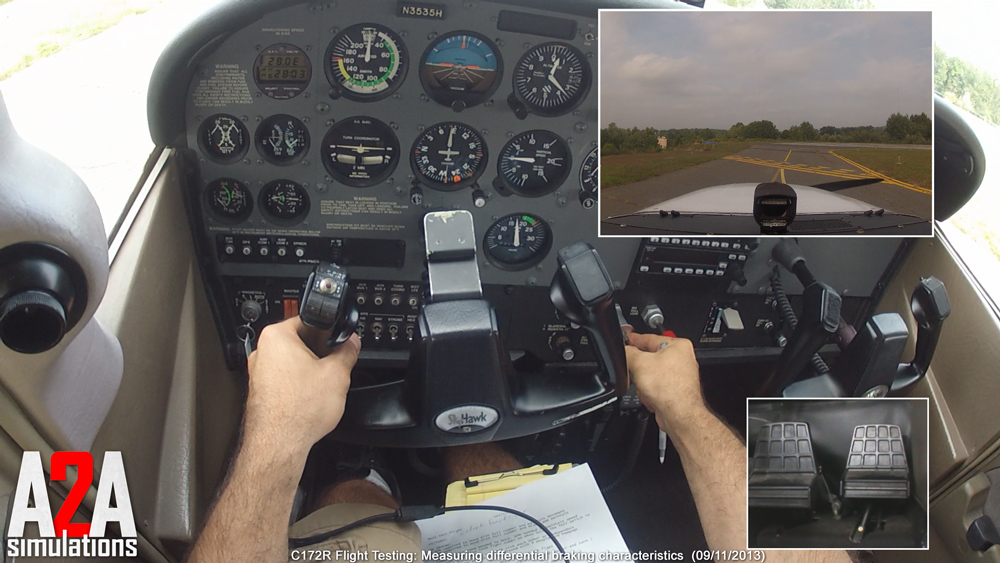 New Accu-Sim Torque and P-factor Physics
We removed all FSX torque and p-factor and replaced it with new physics in Accu-Sim. This is an all-new system and is still in progress, but so far what we see is a significant improvement over what we've seen in FSX.

Also, our Accu-Sim C172 Trainer has ignited the FSX community more than we have ever experienced. We welcome the new members to our Accu-Sim family.

I'll be around all day and will gladly test. Thanks for all the hard work A2A!

Wow! Im really looking forward to trying out the new elevator and yoke! This is really great stuff, and shows how much work you guys put into your aircraft!

Will this update make the rudder controllable by buttons?

Not only is this a precedent-setting model.. it's a new standard for support, too..

Re: AW: New update in progress

I am now battling between work-at-home, the 777 and the 172, between those I would need the day to have 30 hours. Or a way not to sleep

If this goes out by weekend, I will really have to support the next Redbull project... whatever that turns out to be.
Top

SanderK wrote:Will this update make the rudder controllable by buttons?

Thanks for the information Scott, update looks great!

I don't mean to be a bother, but any news on the multiplayer packet flooding that was discussed in this thread here? http://a2asimulations.com/forum/viewtop ... 08&t=35783

Trust A2A to always give you something to look forward to. Awesome.

Great response to customer observations.............cheers.
The sky is the limit.
Anthony
Top

1st Class support from a 1st Class company! A2A listens to its customers and responds with class


In memory of my fallen Brothers in Arms in Viet Nam - may they Rest in Peace.
Top

Sounds great. Thank you Scott and all the other developers at A2A for further improving what already is the best FSX GA aircraft of all time.