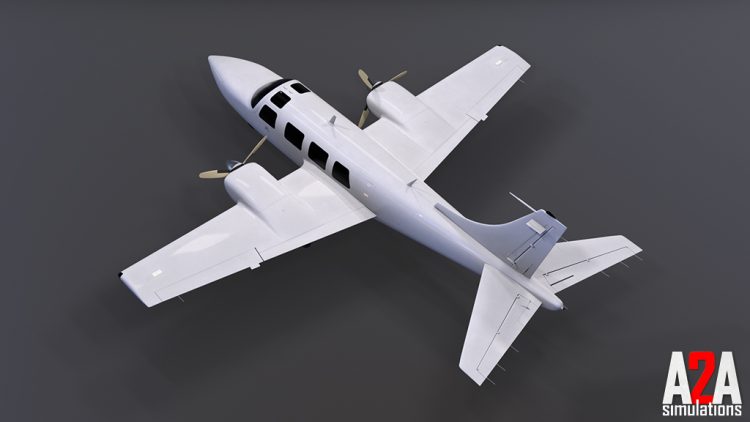 2020 is shaping up to be a remarkable year for flight simmers with the upcoming relaunch of the iconic Microsoft Flight Simulator and the recent release of Lockheed Martin’s Prepar3D v5. We haven’t been able to share much information about our future projects until now, but the team at A2A Simulations are excited to be building the Aerostar 600 twin for both MSFS and P3D v4/v5 using the latest generation of Accu-Sim.

For those new to A2A Simulations, Accu-Sim is a technology that allows us to build lifelike, persistent aircraft with all their underlying systems and characteristics. The first iteration of Accu-Sim was launched in 2008 in the form of a classic 4-engine piston airliner, the Boeing 377 Stratocruiser.

As Accu-Sim has evolved and grown in reputation, A2A Simulations has been given the chance to simulate training aircraft for the US military. This is both a tremendous responsibility and a great opportunity to develop our core technology based on crucial hands-on experience, so that it can simulate other powerplants, systems and even rotary-wing aircraft.

We still hope to be able to bring some of these military products or their offshoots to public release in the future. However, our current focus is very much on releasing our first product for the 2020 iteration of Microsoft Flight Simulator.

Many of our customers have asked if we plan to “port” our existing Accu-Sim fleet into the new sim. Instead, we’ve spent the past year developing a new version of Accu-Sim to build and test virtual aircraft. Future releases won’t just be ports of existing products, but instead they’ll take full advantage of the features and potential of the new platform to bring an unprecedented level of fidelity and quality.

The Accu-Sim Aerostar is also different in that it’s being designed largely for the purpose of training. A2A owner and developer Scott Gentile owns and operates Aerostar N122PC and wants his airplane “Accu-Simmed” for the specific purpose of becoming the safest pilot he can be.

Double blind tests have been conducted between pilots trained exclusively on the real aircraft compared to pilots trained mostly using Accu-Sim and the difference between these groups is indistinguishable. This is well beyond what the existing simulators we’ve tested are capable of. This is why we accepted the call from the US military. The need was just so obvious,

Anyone who wishes to learn how to operate a real Aerostar 600 will be able to on a level of detail never before possible.

A2A has always believed that when things are real, it’s easier. Just flying an Accu-Sim aircraft for fun turns you into a better pilot because you are experiencing many things indistinguishable from reality. Experiencing real physics and sound is so fun you don’t even realize you are learning,

Because Microsoft Flight Simulator and the Accu-Sim v4 tools are still in development, it’s too early for us to know with any certainty how long it will take to complete this first project.

However once the Aerostar 600 is released, it will represent the first airplane created with the new Accu-Sim v4 toolset, so successive aircraft developed will take less time to reach the same level of quality.

In the meantime, congratulations to Microsoft and Asobo for creating a wonderful new flight simulation to propel this industry well into the future.